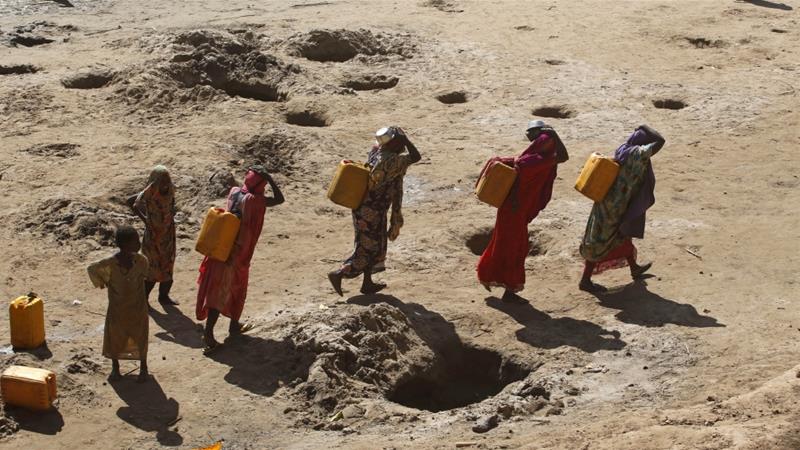 How to tackle repetitive droughts in the Horn of Africa

How to tackle repetitive droughts in the Horn of Africa

Investing in localised initiatives to mitigate drought can help the continent to break the cyclic nature of disasters. The United Nations Food and Agriculture Organization (FAO) recently declared that millions of citizens in the Horn of Africa face food shortages. Owing to a persistent lack of rainfall between October and December, as many as 12 million people across Ethiopia, Kenya and Somalia are in dire need of food assistance.

But this is not new. Almost every year, around the same time, similar headlines appear in the news. For example, in 2014, 2015 and in 2016, news of drought and famine across the Horn of Africa was in the headlines. It is a cruel cycle that is likely to repeat itself again and again despite the fact that many of these countries are doing their best to prevent drought and other climate-related disasters.

Drought mitigation strategies in the Horn of Africa include both short-term approaches, such as distributing food to those

affected and long-term approaches such as planting drought-tolerant crop varieties that can withstand insufficient rainfall, or diversifying one’s crop and income base so that there is something to fall back on when drought strikes.

Kenya’s government, for example, is supplying food to areas worst hit by drought, and is also working on sustainable long-term solutions such as investing in community water sources so that they do not depend on rain-fed agriculture.

Such efforts have not gone unnoticed and the recently appointed UN Secretary-General Antonio Guterres commended the Ethiopian government on their response to the 2016 drought. The question then becomes: what can be done differently to avoid these repetitive cycles of drought and bring the hunger crisis in the Horn of Africa to a definitive end? How can we build better resilience to climate-related disasters?

First, there is need for increased strategic integration and coordination between governments and NGOs. They need to coordinate their efforts aiming to help farmers become more resilient to drought and other climate change-related disasters.

In Kenya, for example, there are many organisations that are investing significantly into building resilience to drought and climate change for farmers. The government, NGOs, foundations, and CGIAR’s research programme on climate change all work towards this goal, but there is little coordination between them.

Responding to climate change and building sustainable drought resilience will require a dedicated and coordinated effort. Better coordination can increase efficiency in dealing with drought and equipping citizens with tools and other resources that they need to be able to successfully respond to climate change.

Coordinated efforts can also offer the best option for strengthening livelihoods through improved agricultural productivity and they can build the capability of households to diversify their incomes in order to manage drought-induced shocks.

Countries are already working towards strengthening the coordination between government agencies and NGOs in their efforts to address persistent droughts.

Just last week, the Kenyan president called for streamlining of relief assistance being given by different ministries. He asked for all drought relief help to be distributed through one channel.

Most importantly, recent discussions about the need to strengthen drought risk management strategies across the African continent have resulted in the proposal for the formation of Drought Resilient and Prepared Africa (DRAPA), a new strategic framework that focuses on enhancing resilience to drought throughout Africa, while inspiring individual African countries to develop their own short and long-term drought mitigation plans (PDF).

The DRAPA will be working towards getting regional institutes that deal with drought mitigation together under African Union leadership, and enforcing their collaboration with the international community, including UN agencies such as the FAO.

How to get results

Once integration and coordination drought relief efforts has been achieved, there will be the need to create innovative ways to disseminate available information and solutions to farmers. There is a need for this sort of information to be widely available with open access, so that farmers and citizens can take action. Projects working towards disseminating information are already beginning to emerge in Africa. For example, mobile phones are being used to send climate information to farmers so that they can plan and put appropriate drought mitigation strategies in place.

In Ethiopia, real-time maps generated through Satellite-Assisted Pastoral Resource Management initiative are relayed to pastoralists who use them in times of drought to find pasture for their animals.

Another innovative approach to disseminate information is being used by “maarifa knowledge centres“. These are innovative one-stop information centres that are run by Arid Lands Information Network. These modified shipping containers are used as a local hub for information on climate change, including updated information on drought and ways to mitigate it.

While these current efforts by governments, NGOs, Africans and the international community to avoid these repetitive cycles of drought will definitely make a difference, it is important to note that the success of these efforts will vary depending on the country and the commitment of their elected leaders.

Similarly, these initiatives’ success will also depend on the continued collaboration and sustained commitment by all the stakeholders involved. Furthermore, other political reasons including the political stability of these countries may hinder the success of these initiatives.

Investing in short and long-term localised initiatives to mitigate drought and innovative ways to disseminate available information to farmers accompanied by strategic, well-planned and coordinated region-wide drought mitigation strategies can help the African continent to break this cyclic nature of droughts once and for all. Time is ripe.

Esther Ngumbi is a post-doctoral researcher at the Department of Entomology and Plant Pathology at Auburn University in Alabama. She serves as a 2017 Clinton Global Initiative University Mentor for Agriculture, and is a 2015 Food Security New Voices Fellow at the Aspen Institute.

The views expressed in this article are the author’s own and do not necessarily reflect Al Jazeera’s editorial policy.